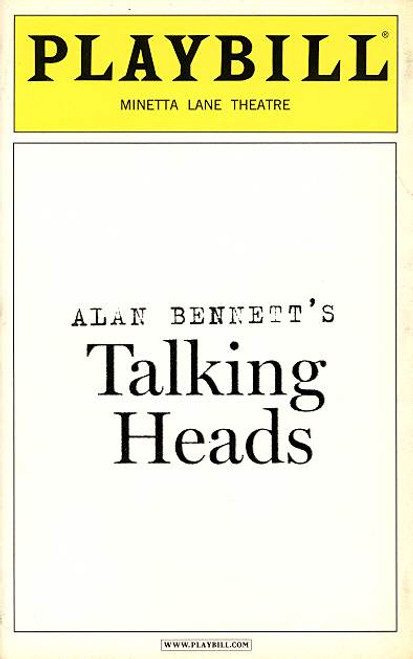 Talking Heads is a stage adaptation of the BBC series of the same title created by Alan Bennett. It consists of six monologues presented in alternating programs of three each. Various incarnations of the original BBC television series found their way to the stage, including adaptations produced in the West End in 1992 and 1998 and at the Tiffany Theater in Los Angeles in 2002.  Staged by Michael Engler, the off-Broadway production opened at the Minetta Lane Theatre in Greenwich Village on April 6, 2003 and ran until September 7. The opening night casts included Brenda Wehle as Celia, Christine Ebersole as Irene, Kathleen Chalfant as Susan, Valerie Mahaffey as Leslie, Daniel Davis as Graham, and Lynn Redgrave as Miss Fozzard. Cast - Lynn Redgrave, Kathleen Chalfant, Daniel Davis, Christine Ebersole, Valerie Mahaffey, Frances Sternhagen, Brenda White. (June 2002)