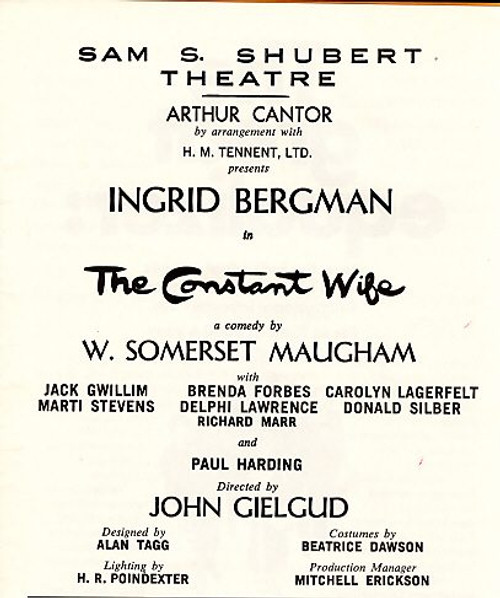 The Constant Wife, a comedy of manners, was written by W. Somerset Maugham in 1926 and later published for general sales in April 1927. The play was first produced at the Ohio Theatre (Loudonville) Ohio, on November 1, 1926, with Ethel Barrymore playing the title role, and Mabel Terry-Lewis, and C. Aubrey Smith as support. It ran on Broadway for 295 performances, and was successfully toured by Ms. Barrymore afterwards. When the first edition of the play was published in 1927 Maugham dedicated it to her. Years later, he said that her performance was the best he had seen in any of his plays. The West End premiere at the Strand Theatre in April 1927, starring Fay Compton, was by contrast, a critical and box-office fiasco. Subsequent London revivals have starred Ruth Chatterton (Globe Theatre, 1937); Ingrid Bergman (Albery Theatre, September 1973 — note, John Gielgud's staging, also starring Ingrid Bergman and Jack Gwillim, was subsequently revived at the Shubert Theatre on Broadway in April 1975); and Jenny Seagrove (Apollo Theatre, April 2002, then transferring to the Lyric Theatre, June 2002). In December 1951, a revival starring Katharine Cornell was staged for a summer festival in Colorado. It was such a success that Cornell took the production to the National Theatre on Broadway starring herself and Brian Aherne. It grossed more money for Cornell's production company than any play she and her husband-director Guthrie McClintic ever produced. Recent revivals include New York City (2005), Minneapolis (2005), and Charleston, SC (2007). The Constant Wife by W.Somerset Maugham (1975) Ingrid Bergman, Jack Gwillim, Marti Stevens, Brenda Forbes, Carolyn Lagerfelt, Paul Harding - Sam S Shubert Theatre.