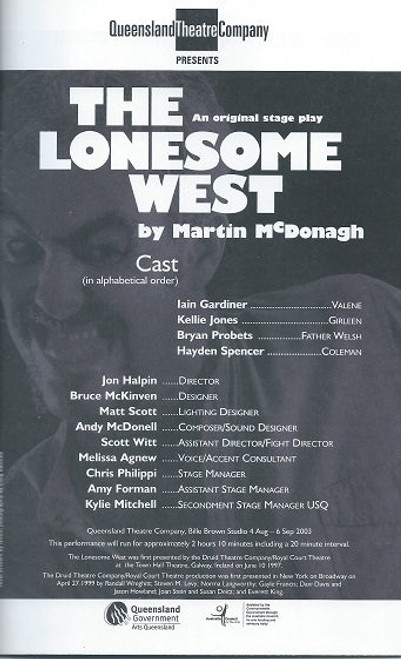 The Lonesome West is a play by contemporary Irish playwright Martin McDonagh, part of his Connemara trilogy, which includes The Beauty Queen of Leenane and A Skull in Connemara. All three plays depict the shocking and murderous goings-on in the Western Ireland town of Leenane.

The play premiered in June 1997 at the Druid Theatre Company in Galway, at the Town Hall Theatre in a co-production with the Royal Court Theatre.
The play transferred to the Royal Court Theatre, London on 26 July 1997.
The play premiered on Broadway at the Lyceum Theatre on 27 April 1999. The same four actors who had appeared in the Galway and London productions also appeared in the Broadway production: Brían F. O'Byrne played Valene, Maelíosa Stafford played Coleman, David Ganly played Father Welsh, and Dawn Bradfield played Girleen. Garry Hynes directed all three productions. The play closed on 13 June 1999 after 55 performances and 9 previews.