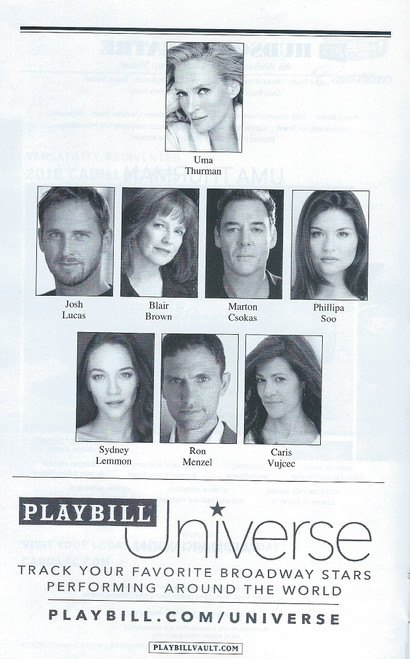 The Parisian Woman is a 2013 play by Beau Willimon. It premiered at the South Coast Repertory in April 2013 and centers on Chloe, a socialite armed with charm and wit, coming to terms with politics, her past, her marriage and an uncertain future. The play opened on Broadway on November 30, 2017. The play is inspired by Henri Becque’s La Parisienne.

Its premiere production was at the South Coast Repertory, Costa Mesa, California, from April 19 to May 5, 2013, with previews from April 14, directed by Pam MacKinnon.
The play opened on Broadway for a limited engagement at the Hudson Theatre starting November 30, 2017, following previews which began November 7. The play closed on March 11, 2018. The play, directed by Pam MacKinnon, starred Uma Thurman in her Broadway debut.

The Parisian Woman went through significant rewrites since its first production at South Coast Repertory. Willimon said: “When [the election] did happen—this cataclysmic shift in the country,” says the playwright, “I felt that if I didn’t address it, the play would instantly feel anachronistic. It would be disingenuous to the here and the now to not acknowledge the fact that we’re living in a very different landscape.”