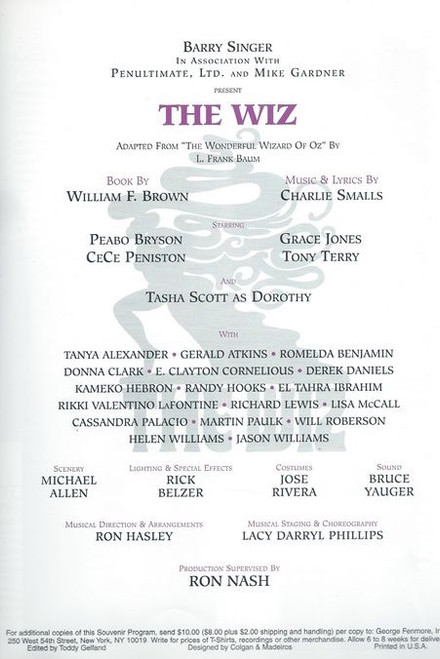 The Wiz: The Super Soul Musical "Wonderful Wizard of Oz" is a musical with music and lyrics by Charlie Smalls and book by William F. Brown. It is a retelling of L. Frank Baum's The Wonderful Wizard of Oz in the context of African American culture. It opened on October 21, 1974 at the Morris A. Mechanic Theatre in Baltimore, Maryland and moved to the Majestic Theatre (not the same Majestic Theatre that played The Wizard of Oz in 1903, which was on Columbus Circle, where Time Warner Center now stands) with a new cast on January 5, 1975.

The 1975 Broadway production won seven Tony Awards, including Best Musical. The musical was an early example of Broadway's mainstream acceptance of works with an all-black cast. The musical has had revivals in New York, London, San Diego and the Netherlands, and an Off Broadway Encores! concert version was staged in June 2009. A film adaptation was released in 1978.

The Pirates of Penzance - 4