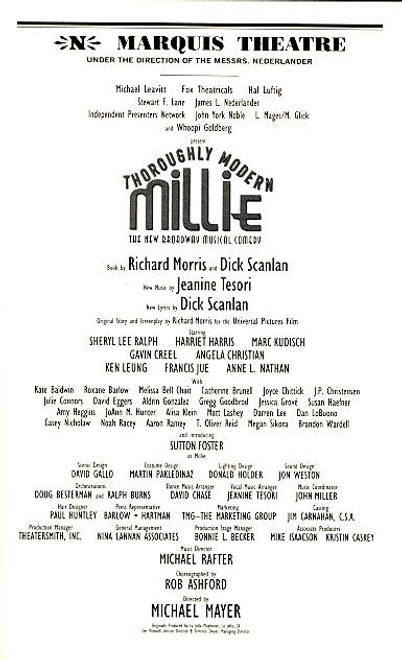 Thoroughly Modern Millie is a musical with music by Jeanine Tesori, lyrics by Dick Scanlan, and a book by Richard Morris and Scanlan.  Based on the 1967 film of the same name,  Thoroughly Modern Millie tells the story of a small-town girl, Millie Dillmount, who comes to New York City to marry for money instead of love – a thoroughly modern aim in 1922, when women were just entering the workforce. Millie soon begins to take delight in the flapper lifestyle, but problems arise when she checks into a hotel owned by the leader of a slavery ring in China.The style of the musical is comic pastiche.

After tryouts at the La Jolla Playhouse in San Diego, California in October 2000,  the show opened on Broadway in April 2002.  The production subsequently won six 2002 Tony Awards, including Best Musical.  Due to the success of the original Broadway production, there were both a United States tour  and a West End production launched in 2003, followed by a United Kingdom tour in 2005.  The musical has since become a popular choice for high school productions.

Whose life is it anyhow