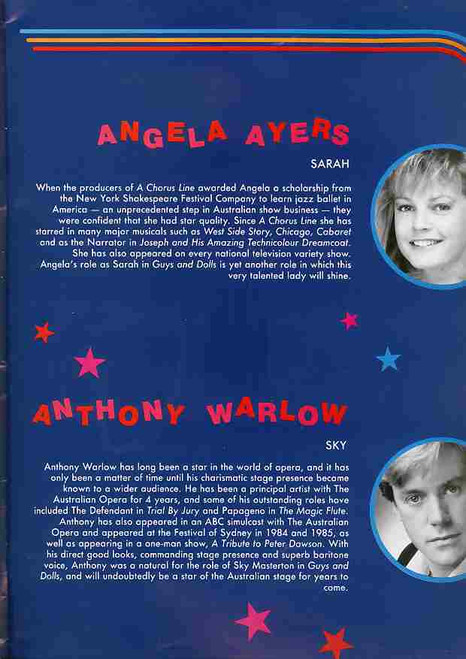 Guys and Dolls is a musical with music and lyrics by Frank Loesser and book by Jo Swerling and Abe Burrows. It is based on "The Idyll of Miss Sarah Brown" and "Blood Pressure", two short stories by Damon Runyon, and also borrows characters and plot elements from other Runyon stories, most notably "Pick the Winner". Premiering on Broadway in 1950, the original production ran for 1200 performances and won the Tony Award for Best Musical. The musical has had several Broadway revivals as well as West End productions. It is generally considered to be among, or perhaps the greatest of all Broadway musicals.

Abe Burrows wrote most of Guys and Dolls, replacing Jo Swerling. The play was selected as the winner for the 1951 Pulitzer Prize for Drama. However, because of Burrows' troubles with the House Un-American Activities Committee (HUAC), the Trustees of Columbia University, the award's advisory board, vetoed the selection, and no Pulitzer for Drama was awarded that year. A 1955 film adaptation starred Marlon Brando, Jean Simmons, Frank Sinatra and Vivian Blaine.

This is the Souvenir Brochure from the Australian 1986 Production.

Size 240 x 330 mm Many beautiful colour plates from the show and cast a must for any collector.
Condition: Good 8/10 (Both Covers have small creases and folds)
(Please Note scans are low res for fast loading)