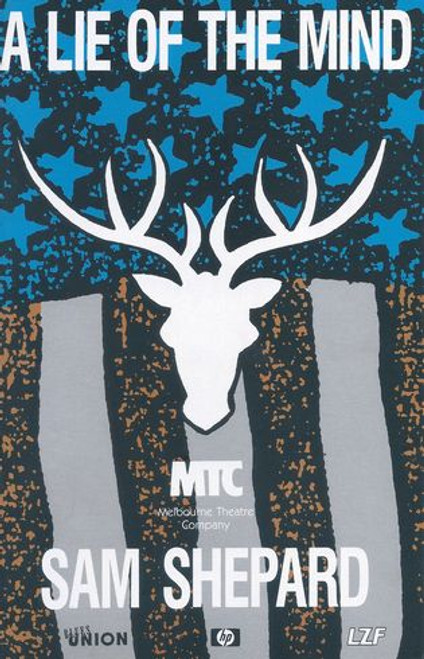 A Lie of the Mind - Melbourne Theatre Company 1987

A Lie of the Mind is a play written by Sam Shepard, first staged at the off-Broadway Promenade Theater on 5 December 1985. The play was directed by Shepard himself with stars Harvey Keitel as Jake, Amanda Plummer as Beth, Aidan Quinn as Frankie, Geraldine Page as Lorraine, and Will Patton as Mike. The music was composed and played by the North Carolina bluegrass group the Red Clay Ramblers. Some critics consider the play the conclusion of a quintet which includes Shepard's Family Trilogy: Curse of the Starving Class (1976), Buried Child (1979), and True West (1980), plus Fool for Love (1983).

Told in three acts set in Montana and California, the story alternates between two families after a severe incident of spousal abuse leaves all their lives altered until the final collision at an isolated cabin. The two families are linked by the marriage of Jake (son of Lorraine and brother of Sally and Frankie) and Beth (daughter of Baylor and Meg and sister of Mike). The play begins with Beth recuperating in her parents' home after a hospitalization resulting from Jake's abuse. Exploring family dysfunction and the nature of love, the play follows Jake as he searches for meaning after his relationship with Beth and her family as they struggle with Beth's brain damage