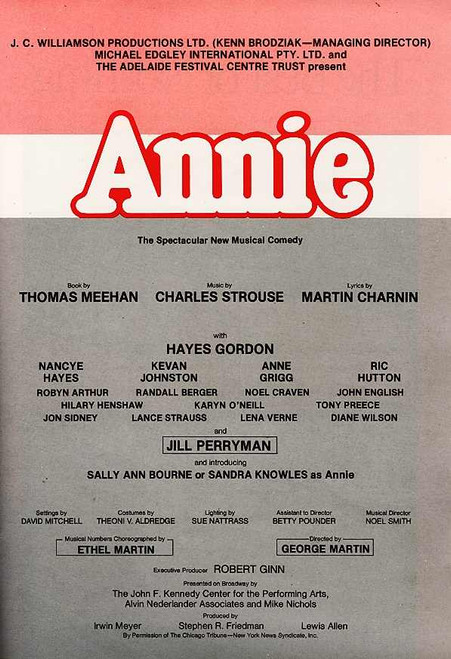 The original Broadway production opened at the Alvin Theatre on April 21, 1977 and starred Andrea McArdle as Annie, Reid Shelton as Daddy Warbucks, Dorothy Loudon as Miss Hannigan, and Sandy Faison as Grace Farrell. Danielle Brisebois was one of the orphans. It was nominated for eleven Tony Awards and won seven, including the Best Musical, Best Score, and Best Book. Replacements in the title role on Broadway included then-child actors Shelley Bruce, Sarah Jessica Parker, Allison Smith and Alyson Kirk. Replacements in the role of Miss Hannigan included Alice Ghostley, Dolores Wilson, Betty Hutton, Marcia Lewis, and June Havoc. Ann Ungar understudied and played for Dorothy Loudon in the role of Miss Hannigan

This Souvenir Brochure is from the Gala Australian Premiere Weds, 25th Oct 1978 at Her Majesty's Theatre Melbourne.