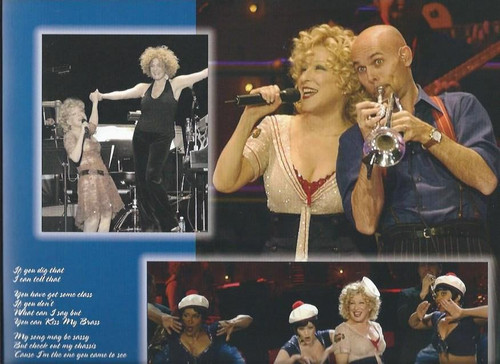 Bette Midler (born December 1, 1945), also known by her informal stage name, The Divine Miss M, is an American singer-songwriter, actress, comedian, film producer and entrepreneur. In a career spanning almost half a century, Midler has been nominated for two Academy Awards, and won three Grammy Awards, four Golden Globes, three Emmy Awards, and a special Tony Award. She has sold over 30 million albums worldwide and along with that has also received 13 Gold, 8 Platinum and 4 Multiplatinum albums by RIAA.

Throughout 2003 and 2004, Midler toured the United States in her new show, Kiss My Brass, to sell-out audiences. Also in 2004, she appeared in a supporting role in Frank Oz' science fiction satire The Stepford Wives, a remake of the 1975 film of the same name also based on the Ira Levin novel. Also starring Nicole Kidman, Matthew Broderick, Christopher Walken and Glenn Close, Midler played Bobbie Markowitz, a writer and recovering alcoholic. The project underwent numerous production problems that occurred throughout its shooting schedule, with reports of problems on-set between director Oz and the actors being rampant in the press. Oz later blamed Midler — who was amid recording her next album and rehearsing for her tour — for being under a lot of stress by other projects and making "the mistake of bringing her stress on the set". While the original book and film had tremendous cultural impact, the remake was marked by poor reviews by many critics, and a financial loss of approximately $40 million at the box office.

An Australian tour in early 2005, Kiss My Brass Down Under, was equally successful. Midler joined forces again with Manilow for another tribute album, Bette Midler Sings the Peggy Lee Songbook. Released in October 2005, the album sold 55,000 copies the first week of release, returned Midler to the top ten of US Billboard 200, and was nominated for a Grammy Award.

The Marriage of Bette and Boo