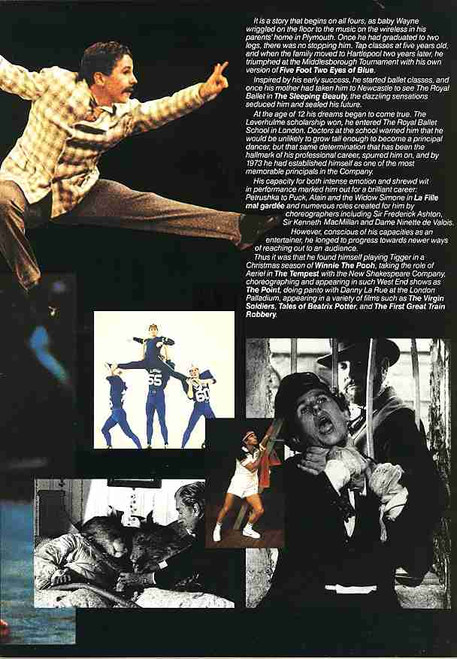 Wayne Philip Colin Sleep OBE (born 17 July 1948) is a British dancer, director, choreographer and panelist. He was a Principal Dancer with the Royal Ballet and has appeared as a Guest Artist with several other ballet companies. At only 5'2", Sleep is famous for being the shortest male dancer ever admitted into the Royal Ballet School. Had he not left his audition for the school early and missed his final physical examination, he would not have gained a place. Because of his diminutive stature many directors were reluctant to cast him in traditional male lead roles. As a result many roles were created for him by noted choreographers including Ashton, MacMillan, de Valois, Layton[disambiguation needed ], Nureyev and Neumeier. Sleep is often chosen for character roles because of his unusual physique. In 1982, Andrew Lloyd Webber adapted his Variations album as the second half of stage show Song and Dance for Sleep. Sleep created the role of Mr. Mistoffelees in Lloyd Webber's musical Cats in London's West End, at the New London Theatre, on 11 May 1981.