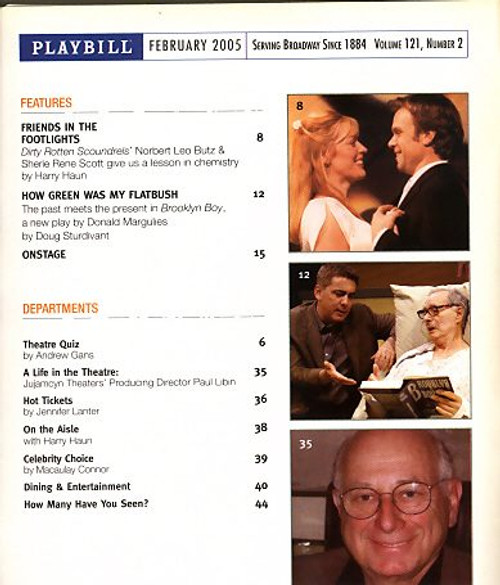 Brooklyn Boy is a play by American playwright Donald Margulies. Novelist Eric Weiss, critically celebrated but unsuccessful, "arrives" when his new, autobiographical novel becomes a best-seller. An outsider all his life, he is suddenly on the inside of everything: town cars, television studios, the Sunday book review. But as his career takes off, his personal life stutters. His father lies ill in Maimonides Hospital, Jewish Brooklyn's version of the river Styx, wondering when Eric will produce his first grandchild. His former friends and neighbors in Brooklyn celebrate his success while simultaneously being suspicious about his attitude toward them–in life and in his novel. And his success, rather than oiling the waters of his marriage, troubles them for him and his writer-wife. Brooklyn Boy is Margulies' first work for the stage since winning the Pulitzer Prize for Drama with his Dinner with Friends. Tony Award-winning director Daniel Sullivan, who directed South Coast Repertory's production of Dinner with Friends returned to SCR to direct the world premiere Brooklyn Boy starring Adam Arkin as Eric Weiss; Allan Miller as his father Manny; Dana Reeve as his wife Nina; as well as Arye Gross, Ari Graynor, Mimi Leiber, Kevin Isola and Polly Draper. His staging was a co-production by South Coast Repertory and the Manhattan Theatre Club, and moved to the Biltmore Theatre on Broadway in January, 2005. The novelist Thomas Wolfe was one of the first American writers to point out that you can't go home again. In Brooklyn Boy, Margulies makes his own funny, warm and moving testament to that adage, while adding the irony that you can also never leave. Brooklyn Boy (Feb 3 2005) Opening Night Adam Arkin, Polly Draper, Ari Graynor, Arye Gross, Kevin Isola - Biltmore Theatre.

A Jew Grows in Brooklyn