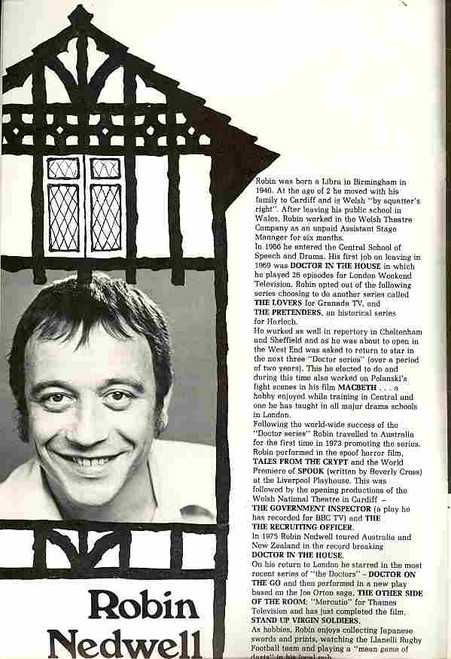 Doctor in Love is based on a 1960 British comedy film — part of the Doctor in the House series, that starred James Robertson Justice as Sir Lancelot Spratt and Michael Craig as Dr Richard Hare, and later made into very successful television series. The stars brought Richard Gordon stories to the Australian Stage with Stars Robin Nedwell and Geoffrey Davies.

Nedwell’s became a well-known face almost overnight when he was cast in Doctor in the House (1969), alongside other medical students played by Barry Evans, George Layton, Martin Shaw, Simon Cuff and Geoffrey Davies, all trying the patience of Professor Loftus (Ernest Clark). The ITV sitcom was launched after LWT’s then head of comedy, Frank Muir, acquired the rights to adapt Richard Gordon’s “Doctor” books, which had already been brought to the screen in feature films from the mid-Fifties onwards.

Davies’ film roles include Oh! What a Lovely War, Vault of Horror and Doctor in Trouble. His TV work includes Casual Affair, Kindly Leave the Raj and the Fossett Saga.

He is best known for his role as Dr. Dick Stuart-Clark in the television comedy series Doctor in the House and all of its sequels, going to Australia for Doctor Down Under. Back in the UK, he appeared at Windsor and the Old Vic where he was in The Ghost Train. Davies also appeared in a Cinderella pantomime, where he played the role of Buttons, the servant of Cinderella’s stepfather, and Cinderella’s friend. He has done a number of tours of the Far East as well as Australia and New Zealand.