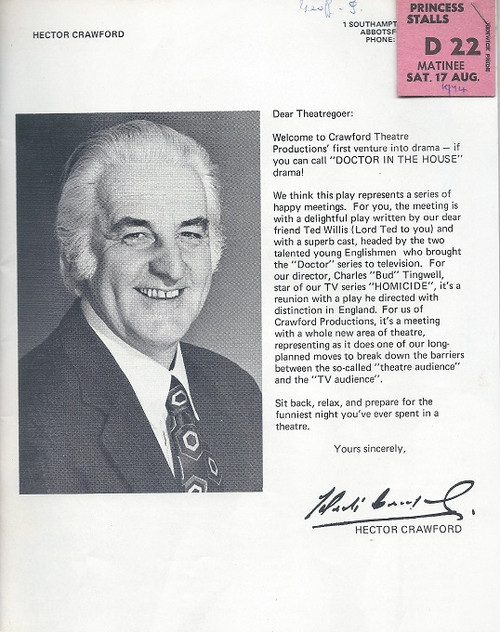 Doctor in the House is a 1954 British comedy film directed by Ralph Thomas and produced by Betty Box. The screenplay, by Nicholas Phipps, Richard Gordon and Ronald Wilkinson, is based on the novel by Gordon, and follows a group of students through medical school. It was the most popular box office film of 1954 in Great Britain. Its success spawned six sequels, and also a television and radio series entitled Doctor in the House and stage productions.
It made Dirk Bogarde one of the biggest British stars of the 1950s. Other well-known British actors featured in the film were Kenneth More, Donald Sinden and Donald Houston. James Robertson Justice appeared as the irascible chief surgeon Sir Lancelot Spratt, a role he would repeat in many of the sequels.

This Souvenir Program is from the Australian National Production 1974

Size 235 x 185 mm  Pictures and information of the cast and show, original ticket is stapled on 2nd page
Condition: Used Good 8/10
(Please Note scans are low res for fast loading)
Each Order will incur a $5.00 handling fee (including free shipping)
All Prices Shown are in USD (United States of America Dollars)
All Payments by Paypal Just Checkout as GUEST no need to register