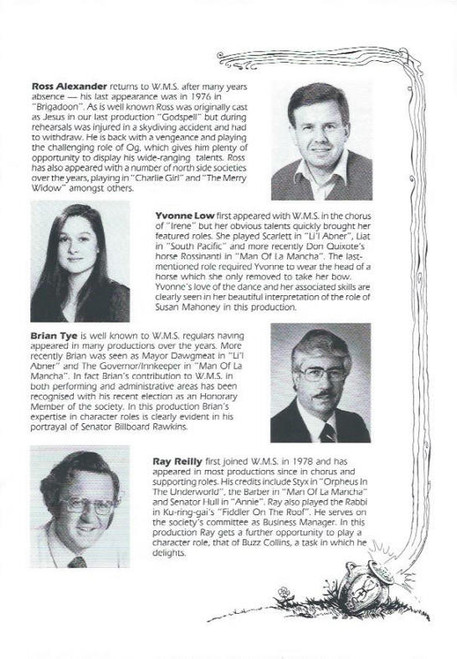 Finian's Rainbow is a musical with a book by E.Y. Harburg and Fred Saidy, lyrics by Harburg, and music by Burton Lane. The 1947 Broadway production ran for 725 performances, while a film version was released in 1968 and several revivals have followed. Finian moves to the southern United States (the fictional state of Missitucky is a humorous combination of Mississippi and Kentucky) from Ireland with his daughter Sharon, to bury a stolen pot of gold near Fort Knox, in the mistaken belief that it will grow. A leprechaun follows them, desperate to recover his treasure before the loss of it turns him permanently human. Complications arise when a bigoted and corrupt U.S. Senator gets involved, and when wishes are made inadvertently over the hidden crock. The Irish-tinged score also includes gospel and R&B influences.

Located at Chatswood on Sydney’s North Shore, Willoughby Theatre Company is a not-for-profit organisation that strives to engage artists and production staff in every aspect of the production process and methodology in the theatre. Founded in 1957, Willoughby Theatre Company Inc. is one of Australia's leading theatre companies. Operating on a not-for-profit basis we were established to provide quality theatre for the communities of Willoughby and surrounding areas.

From humble beginnings as The Fellowship Players in 1957, the Company has developed and matured. In 1960 the name was changed to Willoughby Players and in 1969 took on a new persona as Willoughby Musical Society, a name that became synonymous with quality theatre of an exceptional standard. The progress to Incorporation took place in 1987.