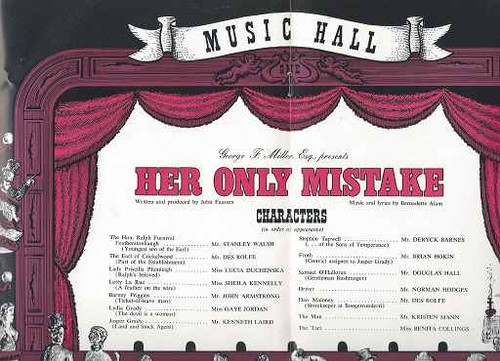 Music and Lyrics by Bernadette Alam

The Music Hall Theatre Restaurant was a popular entertainment venue located in Neutral Bay, Sydney, New South Wales, which operated from 1961 to 1980. Built in 1921, the building was formerly known as Hoyts Southern Cross cinema, and also spent a short period of time in the late 1950s operating as a skating rink.

The Music Hall's first production, which starred Barry Creyton, was a revival of one of the many stage adaptations of the famous 19th century sensation novel East Lynne by Ellen Wood. Subsequent productions included The Face at the Window, Lady Audley's Secret (another revived Victorian melodrama) and How the West was Lost, which was written by Creyton. Creyton created characters for the Music Hall's regular actors such as Sheila Kennelly, Barry Lovett, Alan Dearth, Des Rolfe, which were retained and expanded by John Faassen who wrote and directed there for many years. Peter Pinne's "The Magic of George Miller's Music Hall" covers the history of this theatre.