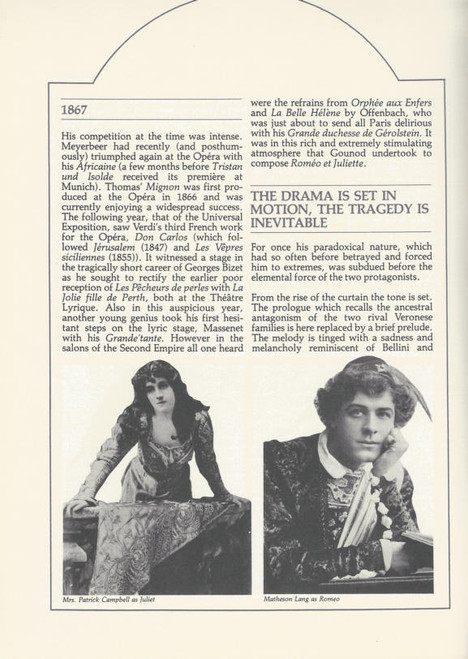 Romeo and Juliet is a tragedy written by William Shakespeare early in his career about two young star-crossed lovers whose deaths ultimately reconcile their feuding families. It was among Shakespeare's most popular plays during his lifetime and, along with Hamlet, is one of his most frequently performed plays. Today, the title characters are regarded as archetypal young lovers.

At least 27 operas have been based on Romeo and Juliet.The earliest, Romeo und Julie in 1776, a Singspiel by Georg Benda, omits much of the action of the play and most of its characters, and has a happy ending. It is occasionally revived. The best-known is Gounod's 1867 Roméo et Juliette (libretto by Jules Barbier and Michel Carré), a critical triumph when first performed and frequently revived today. Bellini's I Capuleti e i Montecchi is also revived from time to time, but has sometimes been judged unfavourably because of its perceived liberties with Shakespeare; however, Bellini and his librettist, Felice Romani, worked from Italian sources—principally Romani's libretto for an opera by Nicola Vaccai—rather than directly adapting Shakespeare's play. Among later operas there is Heinrich Sutermeister's 1940 work Romeo und Julia.