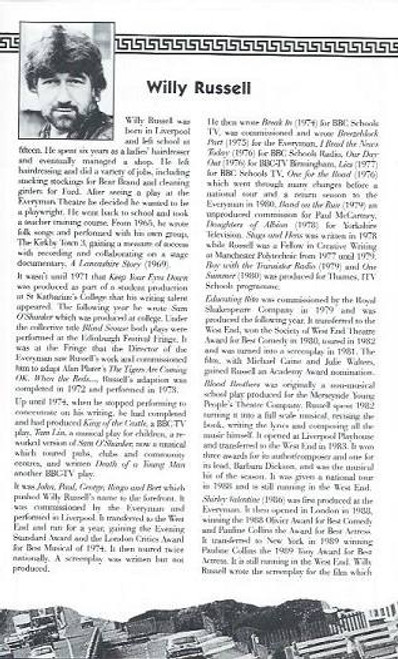 Shirley Valentine is a one-character play by Willy Russell. Taking the form of a monologue by a middle-aged, working class Liverpool housewife, it focuses on her life before and after a transforming holiday abroad. Commissioned by the Everyman Theatre in Liverpool, the play premiered in 1986, with Noreen Kershaw directed by Glen Walford. Two years later it opened in London's West End at the Vaudeville Theatre, with Pauline Collins directed by Simon Callow. After eight previews, the Broadway production, with Collins again directed by Callow, opened on 16 February 1989 at the Booth Theatre, where it ran for 324 performances. Ellen Burstyn replaced Collins later in the run, and Loretta Swit starred in a US national tour in 1995. From 26 March - 8 May 2010, as part of the Willy Russell season at the Menier Chocolate Factory, Meera Syal played Shirley in the production's first London West End revival. A West End transfer of the Menier Chocolate Factory production ran at the Trafalgar Studios from 20 July - 30 October 2010. Meera Syal reprised her role as Shirley. A 30th Anniverary Tour, starring Jodie Prenger will run in the UK from March 2017 to November 2017. Prenger was met with rave reviews.