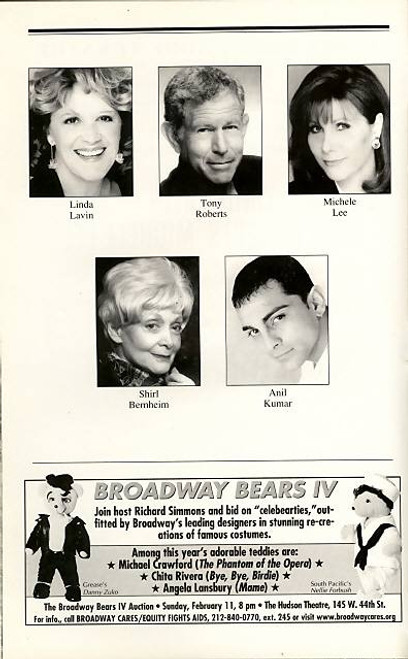 The Tale of the Allergists Wife (Play)

The original Manhattan Theatre Club production opened on February 29, 2000 and ran for 56 performances. Excellent reviews prompted a move to Broadway. After 25 previews, it opened on November 2, 2000 at the Ethel Barrymore Theatre, where it ran for 777 performances. The original cast, directed by Lynne Meadow, included Linda Lavin as Marjorie, Tony Roberts as Ira, and Michele Lee as Lee. Later in the run, Lavin was replaced first by Valerie Harper and then by Rhea Perlman, while Richard Kind and Marilu Henner assumed the roles of Ira and Lee.

This Playbill is from the play Tale of the Allergists Wife starring Lind Lavin, Michele Lee -Tony Roberts- Directed by Lynne Meadow.

The Time of Your Life