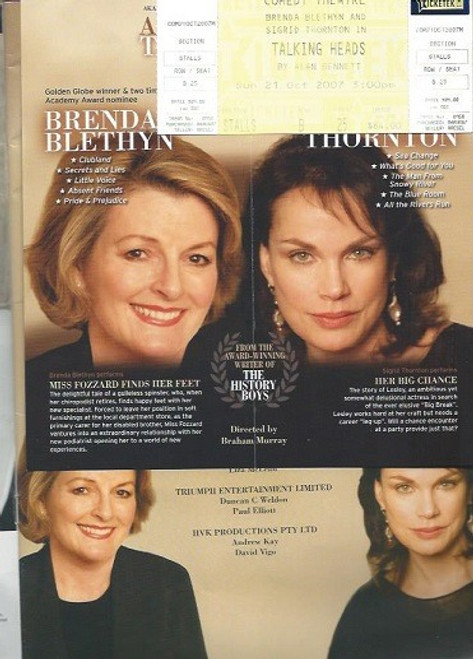 Talking Heads is a stage adaptation of the BBC series of the same title created by Alan Bennett. It consists of six monologues presented in alternating programs of three each.
The Hand of God
Antiques dealer Celia cultivates friendships with her aging neighbours in the hope she will be able to get a good deal on their treasures when they die. She is particularly pleased to sell an odd sketch of a finger for £100, only to discover it was a lost Michelangelo masterpiece, a study of the central image of the hand of God on the ceiling of the Sistine Chapel worth millions.
A Lady of Letters
In an effort to remedy the social ills surrounding her, Irene Ruddock compulsively writes letters of protests and complaints to everyone she can, including her MP, the police, and her local chemist.
Bed Among the Lentils
Susan, the alcoholic wife of a vainly insensitive vicar, distracts herself from her marriage by conducting an affair with grocer Ramesh Ramesh.
Her Big Chance
After appearing in a series of small, unimportant roles, aspiring actress Lesley is thrilled to be cast by a West German filmmaker, until she discovers she will be appearing in soft pornography.
A Chip in the Sugar
Graham, a closeted middle-aged man with a history of mild mental health problems, finds his life upended when his aging widowed mother, on whom he dotes, is reunited with an old flame who is his exact opposite. When he unearths a secret about the man's past, he triumphantly confronts his mother with the information and restores the status quo and his comfortable life but destroys her chance of happiness in the process.
Miss Fozzard Finds Her Feet
A lonely, middle-aged department store clerk finds her life consumed with a burgeoning relationship with her new podiatrist, a decidedly kinky fellow whose all-consuming foot fetish prompts him to pay her to model a variety of shoes while also indulging in other activities.