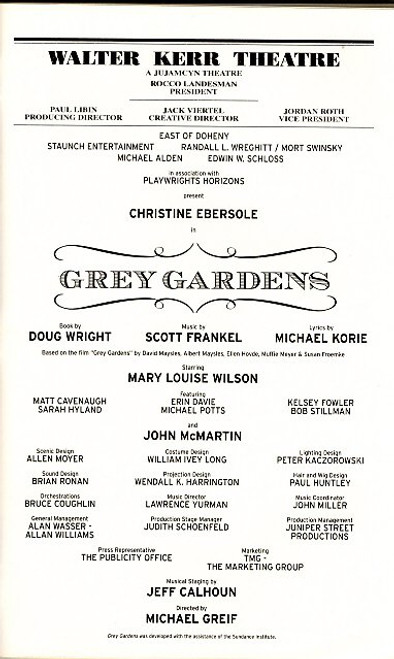 Grey Gardens is an American seriocomic musical with book by Doug Wright, music by Scott Frankel, and lyrics by Michael Korie, based on the 1975 documentary of the same title about the lives of Edith Ewing Bouvier Beale ("Big Edie") and her daughter Edith Bouvier Beale ("Little Edie") by Albert and David Maysles. The Beales were Jacqueline Kennedy's aunt and cousin, respectively. Set at Grey Gardens, the Bouviers' mansion in East Hampton, New York, the musical tracks the progression of their lives from their original status as rich and socially polished aristocrats to their eventual largely isolated existence in a home overrun by cats and cited for repeated health code violations. However, its more central purpose is to untangle the complicated dynamics of their dysfunctional mother/daughter relationship. The show takes place in two acts, the first of which is a speculative take on what their lives might have been like in their glory days and the second of which hews closely to the 1975 documentary in its portrayal of their lives in later years. In the first act, which takes place in 1941, Little Edie is 24 and Big Edie is 47; in the second act, taking place in 1973, Little Edie is 56 and Big Edie is 79. The same actress who plays Big Edie in the first act plays Little Edie in the second act.   Christine Ebersole, Matt Cavenaugh,  Erin Davie, Kelsey Fowler, Sarah Hyland, Michael Potts, John McMartin.

How to Succeed in Bussiness without Really Trying - 14