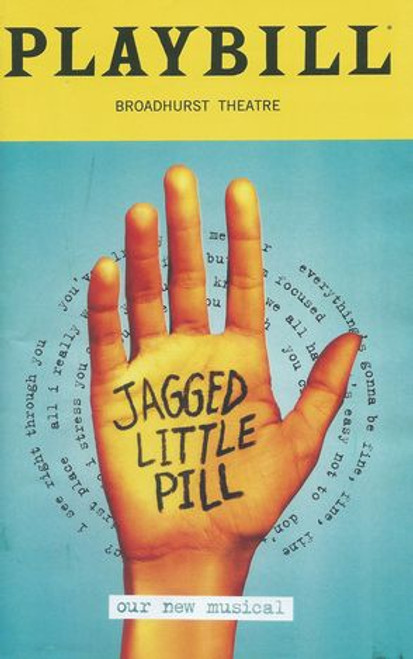 Jagged Little Pill is a rock musical with music by Alanis Morissette and Glen Ballard, lyrics by Morissette, and book by Diablo Cody, with additional music by Michael Farrell and Guy Sigsworth. The musical is inspired by the 1995 album of the same name by Morissette and deals with pain, healing, and empowerment. It premiered at the American Repertory Theater in Cambridge, Massachusetts, on May 5, 2018, directed by Diane Paulus.

The show began previews on Broadway in November 2019, and opened on December 5, 2019. For the 74th Tony Awards, Jagged Little Pill received 15 nominations, the most of any show of the ceremony.

Jagged Little Pill is the third studio album by Canadian singer Alanis Morissette, released on June 13, 1995, through Maverick. It was her first album to be released worldwide. It marked a stylistic departure from the dance-pop sound of her first two albums, Alanis (1991) and Now Is the Time (1992). Morissette began work on the album after moving from her hometown Ottawa to Toronto; she made little progress until she traveled to Los Angeles, where she met producer Glen Ballard. Morissette and Ballard had an instant connection and began co-writing and experimenting with sounds. The experimentation resulted in an alternative rock album that takes influence from post-grunge and pop rock, and features guitars, keyboards, drum machines, and harmonica. The lyrics touch upon themes of aggression and unsuccessful relationships, while Ballard introduced a pop sensibility to Morissette's angst.