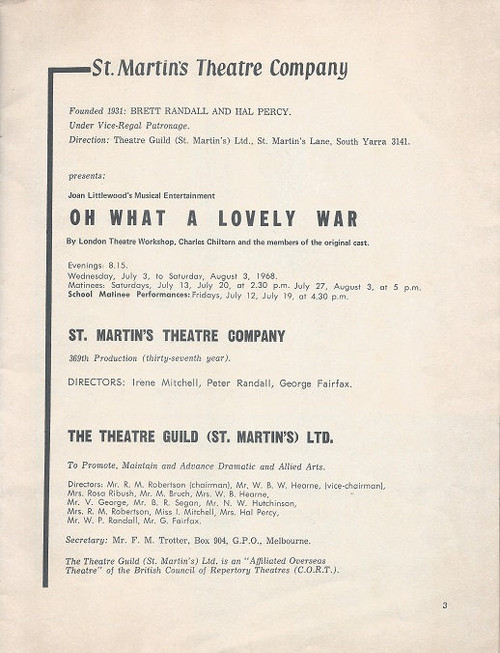 Oh, What a Lovely War! is an epic musical that Joan Littlewood and her Theatre Workshop created in 1963. It is based on The Donkeys by military historian (and future Conservative politician) Alan Clark, with some scenes adapted from The Good Soldier Švejk by Czech humorist Jaroslav Hašek; it was also inspired by Charles Chilton's BBC 1961-1962 documentary radio ballad The Long Trail. It is a satire on World War I (and by extension against war in general). The title is derived from the music hall song "Oh! It's a Lovely War," which is one of the major numbers in the production.

The musical premiered at the Theatre Royal Stratford East on 19 March 1963. It was an ensemble production featuring members of the theatre's regular company, which included Brian Murphy, Victor Spinetti and Glynn Edwards, all of whom played multiple roles. The sets were designed by John Bury. The production subsequently transferred to Wyndham's Theatre in June of the same year. The production was a surprise hit, and the musical was adapted by the BBC for radio several times.

The musical premiered in the United States on Broadway at the Broadhurst Theatre on 30 September 1964 and closed on 16 January 1965 after 125 performances. Directed by Littlewood, the cast featured Spinetti and Murphy, plus Barbara Windsor. It received four Tony Award nominations, including Best Musical, and Tony Award for Best Featured Actress in a Musical (for Windsor). Spinetti won the Theatre World Award.