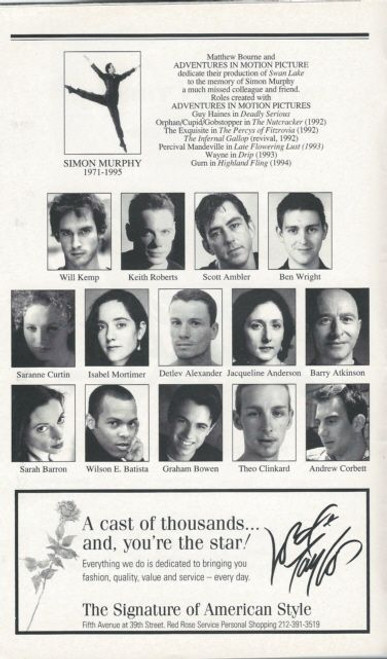 Matthew Bourne's Swan Lake is a piece of ballet-influenced contemporary dance choreographed by Matthew Bourne that was first staged at Sadler's Wells theatre in London in 1995. The longest running ballet in London's West End and on Broadway, it has enjoyed two successful tours in the UK and thrilled audiences in Los Angeles, Europe, Australia and Japan. The ballet is based loosely on the Russian romantic ballet Swan Lake, from which it takes the music by Tchaikovsky and the broad outline of the plot. Stylistic inspiration also came from the Alfred Hitchcock film The Birds. The ballet is particularly known for having the parts of the swans danced by men rather than women.

The ballet has proved enormously successful, with touring companies playing to sold-out houses around the world, and it has won a string of prestigious awards. The ballet was called "a miracle" in a Time Out New York review. However, Matthew Bourne's Swan Lake has also been rebuked by some who resent changes to the standard Russian classic.

Directed and Choreographed by Matthew Bourne.