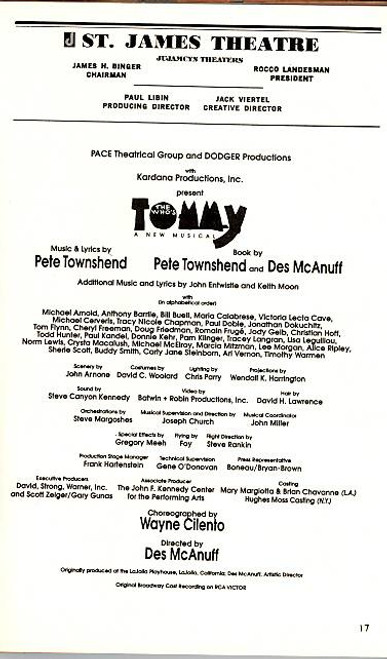 The Who's Tommy is a rock musical by Pete Townshend and Des McAnuff based on The Who's 1969 double album rock opera Tommy, also by Pete Townshend, with additional material by John Entwistle and Sonny Boy Williamson. The musical opened at La Jolla Playhouse in San Diego, California in July 1992. The Broadway debut was at the St. James Theatre on 22 April 1993 and closed on 17 June 1995, after 899 performances and 27 previews. Directed by Des McAnuff with choreography by Wayne Cilento, the original cast included Michael Cerveris (Tommy), Marcia Mitzman (Mrs. Walker), Jonathan Dokuchitz (Captain Walker) and Cheryl Freeman (The Gypsy/Acid Queen) plus an ensemble that included Alice Ripley, Christian Hoff, Norm Lewis, Paul Kandel, Tracy Nicole Chapman, and Sherie Rene Scott. The play subsequently was produced by various touring companies throughout North America and Europe.

The Importance of Being Earnest - 6