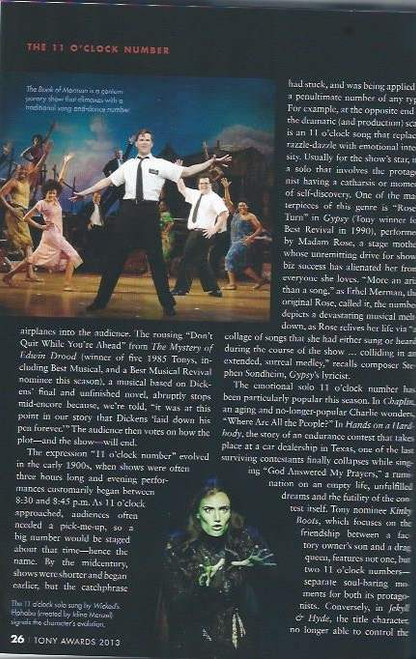 The Antoinette Perry Award for Excellence in Broadway Theatre, more commonly known as Tony Award, recognizes the excellence in live Broadway theatre. The awards are presented by the American Theatre Wing and The Broadway League at an annual ceremony in New York City. The awards are given for Broadway productions and performances, and an award is given for regional theatre. Several discretionary non-competitive awards are also given, including a Special Tony Award, the Tony Honour's for Excellence in Theatre, and the Isabelle Stevenson Award. The awards are named after Antoinette "Tony" Perry, co-founder of the American Theatre Wing.
The rules for the Tony Awards are set forth in the official document "Rules and Regulations of The American Theatre Wing's Tony Awards", which applies for that season only. The Tony Awards are considered the highest U.S. theatre honour, the New York theatre industry's equivalent to the Academy Awards (Oscars) for motion pictures, the Grammy Awards for music, and the Emmy Awards for television. It also forms the fourth spoke in the EGOT, that is someone who has won all four awards. The Tony Awards are also considered the equivalent of the Laurence Olivier Award in the United Kingdom and the Molière Award of France.
From 1997 to 2010, the Tony Awards ceremony was held at Radio City Music Hall in New York City in June and broadcast live on CBS television, except in 1999, when it was held at the Gershwin Theatre. In 2011 and 2012, the ceremony was held at the Beacon Theatre. From 2013 to 2015, the 67th, 68th, and 69th ceremonies returned to Radio City Music Hall. The 70th Tony Awards were held on June 12, 2016 at the Beacon Theatre. The 71st Tony Awards were held on June 11, 2017 at Radio City Music Hall with Kevin Spacey as host.

Best Plays
The Assembles Parties, Lucky Guy, The Testament of Mary, Vanya and Sonia and Masha and Spike
Best Musical
Bring it On the Musical, A Christmas Story, Kinky Boots, Matilda the Musical
Size: 215x 135 cm & 120 Pages High Quality Print
Condition: Used Good 8 – 10
Please Note all items are sold as Used
Each Order will incur a $5.00 handling fee (including free shipping)
All Prices Shown are in USD (United States of America Dollars)
All Payments by Paypal Just Checkout as GUEST no need to register

All associated graphics, logos, trader marks, trade names or copyrights are the property of the original owner and are used here for factual and educational purposes only.
If there are any errors please contact us with corrections mail@www.theatregold-memorabilia.com
Tony Awards Memorabilia